I have been President of Bear Creek Quilt Guild since Feb 2012.  I took over for a friend who had a sudden cross country move.  It was daunting initially but soon I realized that everyone is willing to help and offer advice.


I was supposed to be doing Special Projects which is BOM, fat quarter raffles, etc with my friend, Twana but she carried most of the work as I got busier and more distracted.  Jane and Dana from our bee pitched in on every idea we had for Special Projects, making samples, and completing projects.  It made the year fun and I felt less guilty because Twana had their support.


My son, Paul, died suddenly in July and recovery for the whole family is a slow and painful process.  In early December I told friends and siblings that I felt I had turned a corner on my depression.  I began to be interested in quilting again but in the last week or so I felt dragged down again.  Perhaps it is the holidays…


Tues, December 18th was the Guild Christmas Potluck.  It was a night of fun and laughter.  One lovely surprise was the ladies gave me 58 double friendship stars as a thank you for being president.  I could hardly wait to get home and put them on the design wall.  I can’t work on the quilt until after Christmas but I am eager to play with these blocks.  I don’t know, but I think I will add sashing.  These blocks were a lovely gift that has done a lot to renew my enthusiasm for quilting and life. 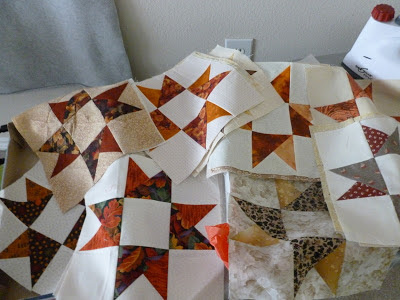 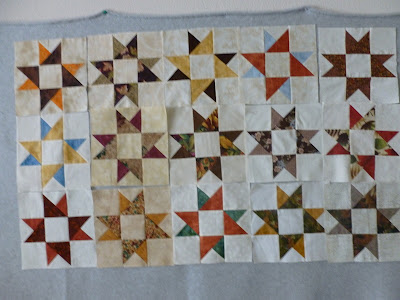 Add comment
Load more...
Newer Post Older Post Home
Subscribe to: Post Comments (Atom)
“There is a vitality, a life force, an energy, a quickening that is translated through you into action, and because there is only one of you in all of time, this expression is unique. And if you block it, it will never exist through any other medium and it will be lost. The world will not have it. It is not your business to determine how good it is nor how valuable nor how it compares with other expressions. It is your business to keep it yours clearly and directly, to keep the channel open. You do not even have to believe in yourself or your work. You have to keep yourself open and aware to the urges that motivate you. Keep the channel open… No artist is pleased. There is no satisfaction whatever at any time. There is only a queer divine dissatisfaction, a blessed unrest that keeps us marching and makes us more alive than the others.” Martha Graham