Time for an update.  Overdue actually but that is life.

Last Fall I was eagerly anticipating Bonnie Hunter's mystery quilt.  I was busy working part time doing food delivery.  I needed extra money and I liked the work.  Things went sideways and I had to reevaluate.

Nothing horrible, just change and it ended up working out amazingly well.

I had to go to the hospital for 3 days in late October.  I had an infection and needed IV antibiotics.  It all worked well except I missed work for a week.  I was bothered that I needed the part time income even though I have a pension and SS income and it was really brought home to me that I'd become dependent on the extra income.

At the end of Jan I was in a very minor fender bender in a restaurant parking lot.  No damage to my car.  I disclosed to my insurance company that I was doing delivery work and they immediately said I wasn't covered.  The insurance company later changed that but wouldn't sell me a policy where I could continue to do delivery work.  In this manner no pizza delivery, no food delivery is covered.  Seemed like I was caught in a situation where I couldn't continue to work without being dishonest.  So I stopped working and thought about what I wanted to do.

I prayed and asked for guidance.  What did I want from life?  etc.  I decided that I wanted to get France launched in life and to be able to sew and create.

It came to me that part of the reason I had to work extra was the expenses of the house I bought before my retirement.  I bought particularly in France's school district so that her life wouldn't be disrupted if I had to take custody.  That worked well but she is  out of high school and I no longer needed that house and it's expenses.

So I called the realtor who I'd used in 2014 and told her I wanted to  sell.  Things went quickly.  So fast that the house sold a couple days before it went on the market for $1000 over asking price and I had to scramble to get an apt and move within 2 weeks.

I got a nice 2 bedroom apt with room in the living room for the longarm plus the couch, chair and tv.  I turned my bedroom into  a sewing room / bedroom.  I like it a lot.

I don't need to work and it came at a perfect time because it is safer to stay at home.  It feels like I slide into a safe situation just before the storm hit.  I feel very blessed.

I did get to see grandies around new year's.  This is a pic of France, Dylan, Kearstyn and Lulu playing a game in the hotel. 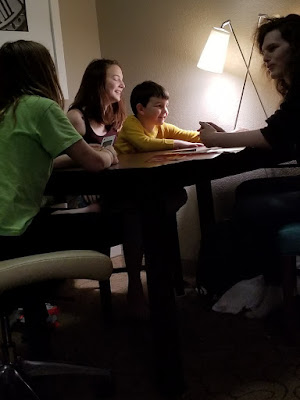 Lulu and I swam with Dylan.  The older grandies didn't go to the pool.  Lulu has drive and always wants to improve.  She watches videos on how to improve. She was pushing Dylan to do more.  The second day when it was just her and I at the pool a couple came to the pool with their kids and Lulu watch them closely and how they were teaching their daughter to swim.  Even though I was only 5 ft away she'd come back to me and say "they told her to scoop the water away".  I am sure she will remind me next time we have an opportunity to swim with Dylan.

It is so much fun to watch the kids grow.
Posted by PeggyB at 12:54 PM

Newer Post Older Post Home
Subscribe to: Post Comments (Atom)
“There is a vitality, a life force, an energy, a quickening that is translated through you into action, and because there is only one of you in all of time, this expression is unique. And if you block it, it will never exist through any other medium and it will be lost. The world will not have it. It is not your business to determine how good it is nor how valuable nor how it compares with other expressions. It is your business to keep it yours clearly and directly, to keep the channel open. You do not even have to believe in yourself or your work. You have to keep yourself open and aware to the urges that motivate you. Keep the channel open… No artist is pleased. There is no satisfaction whatever at any time. There is only a queer divine dissatisfaction, a blessed unrest that keeps us marching and makes us more alive than the others.” Martha Graham