I bought a martelli cutter so that I can cut sitting down. I think I will like it for sitting and trimming blocks, though it seems to collect lint in the cover and I had to blow it out periodically. 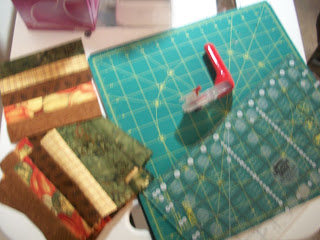 These are rail fence blocks for a swap. The design wall shows some of the blocks I received. I think it probably needs appliqué – maybe houses around the perimeter? Or just put together as is and used as a practice quilting¸ then donated? Regardless, it will be put up for a while so that I can finish the mystery quilt. 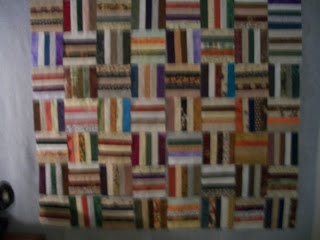 I also marked my new GO dies – winding ways and chisel. I wanted the sharpie marker dried before the weekend so I can make some trial blocks this weekend. 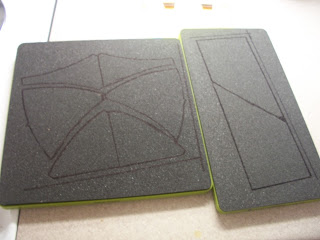 Newer Post Older Post Home
Subscribe to: Post Comments (Atom)
“There is a vitality, a life force, an energy, a quickening that is translated through you into action, and because there is only one of you in all of time, this expression is unique. And if you block it, it will never exist through any other medium and it will be lost. The world will not have it. It is not your business to determine how good it is nor how valuable nor how it compares with other expressions. It is your business to keep it yours clearly and directly, to keep the channel open. You do not even have to believe in yourself or your work. You have to keep yourself open and aware to the urges that motivate you. Keep the channel open… No artist is pleased. There is no satisfaction whatever at any time. There is only a queer divine dissatisfaction, a blessed unrest that keeps us marching and makes us more alive than the others.” Martha Graham